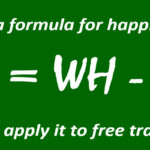 Expressing happiness in a formula can prompt new thinking about the cause of unhappiness and how to be less unhappy.

This formula states that happiness can be increased by improving what is happening or by lowering expectations.

The U.S. is nearly a decade into an economic cycle that has inflamed anxiety that the future is dimmer than the past. Concern about the effects of free trade unites polar opposites on the political spectrum. The happiness formula can help us untangle how we feel about trade by identifying which variables could change.

Turning down the heat on a matter is a good thing. Frustration led U.K. voters to exit the European Union, a decision most regret. In the U.S. anger over the 9/11 terrorist attacks caused a majority to support the invasion of Iraq which is now universally seen as a poor decision. Similar sentiments about the economic outlook has increased interest in protectionist policies.

Optimism is natural for Americans but some of us have not considered that, in many ways, we have had the wind at our back. We benefited from having abundant resources and separation by oceans from lands that suffered the ravages of war. A continuous infusion of immigrants, many of whom helped advance scientific and commercial innovation, also contributed. In other words, the rise of a prosperous U.S. Middle Class occurred when much of the world was in a weak competitive position.

Challenges to the post-war economy began in the 1970s as soaring oil prices saw foreign automakers take market share out of the domestic arena. Ensuing years saw increases in many imported goods, largely electronics, textiles and furniture. Some U.S. jobs were lost to imports, but there was as yet a feeling that trade was a rising tide that lifted all boats.

The North American Free Trade Act is a lightning rod now, possibly because Ross Perot memorably said in his 1992 presidential campaign that approval of NAFTA would be followed by a “giant sucking sound” as jobs moved from the U.S., but that treaty helped blunt imports from Asia.

Expectations began to waver as competitive factors other than free trade contributed to economic insecurity. Work migrated from the industrial centers to those that offered lower costs—from Rust Belt states to those in the Sun Belt. Companies outsourced activities they had performed in-house. Computers made it easier to move work to where it could be performed more cheaply. There has also been the effect of new business models; big-box and online retailers favor low-cost products and business practices that have devastated traditional retailers.

The cumulative effects are profound. In his book, Rebooting Work, Maynard Webb observes that:

The half-life of a company is diminishing quickly. The average life expectancy of a company in the S&P 500 has dropped from seventy-five years in 1937 to fifteen years today.

Turn now to “what’s happening” and what can be done to improve it. Put aside tax policies or spending priorities that require unlikely political consensus. Should the U.S. abandon support for free trade?

There is support for this on the political right and left. If maximization of gross domestic product were the sole objective of trade policy, few countries would engage in free trade. They would instead do what promised to benefit their own economy, even if it damages other countries. Such a beggar-thy-neighbor approach was common after the first World War and it helped lead to the second one.

An argument for free trade is that countries that trade are unlikely to go to war; when goods don’t cross borders, armies will. Another is that global resources are better utilized and broader benefits are created when goods are produced by the most efficient producer. Greater choice and lower prices are other benefits.

A country’s challenge is to use social policies to ease the dislocation that occurs when workers in un-competitive industries lose jobs. When that doesn’t happen, the problem is with social policy, not trade policy. Anxiety over trade has intensified in the wake of the Great Recession but that crisis was rooted in capital markets (i.e., financial instruments based on unsound mortgage debt), not trade policy.

Some who cast a dim eye toward free trade view government negatively; they want it smaller and less involved in our everyday lives. For them, an embrace of protectionism is ironic because such policies require more government involvement in the economy. Government  decides which industries to protect and how to do it. It also decides how to spend the revenue generated by tariffs. Should it be used to improve the nation’s competitiveness? If so, how and where? The opportunity for influence-peddling leads lobbyists to anticipate protectionism as the media views an election—good for their bottom line.

However one feels about government picking winners and losers, protectionism advocates face a key question. How will it increase long-term demand for American products?

If Not Protectionism, What?

The fundamental solution is for Americans to be more productive than their competition. If we can’t do that as the result of innovation, nimbleness or quality, it requires lower costs.

In their book, Better Capitalism, economists Robert E. Litan and Carl J. Schramm propose four strategic initiatives to change what is happening in the decades ahead:

The first initiative runs counter to anti-immigration sentiment, the running mate of protectionism, but it helps the U.S. compete on brainpower. The second and third enhance innovation and economic nimbleness.

Litan’s and Schramm’s fourth initiative is controversial. Industry upstarts and those on the political right often want less regulation. Those on the left want more, as may industry incumbents for whom regulations serve as barriers to competition. Nonetheless, policymakers can clear the regulatory underbrush. They can also reform social policies, such as those concerning education and training, to enhance competitiveness; those that promote equal opportunity will nurture hope in the future.

Another Idea: Cooperation Between Capital and Labor as a Competitive Tool.

The Fairshare Model, a book I’m writing, presents a way to do this. It’s about a performance-based capital structure for companies that raise venture capital in an initial public offering. I call it the Fairshare Model because it balances and aligns the interests of investors and employees.

For decades, venture-stage companies have been responsible for more economic growth and job creation than Fortune 500 companies. They present investors with two risks—failure and overvaluation—and the model mitigates the valuation risk.

The Fairshare Model improves access to capital (#3 above) with a deal that encourages investors to invest. If a rise in the Investor Stock price is a performance criteria, a company will set its IPO price low. It also helps companies attract and manage human capital. They will offer employees Performance Stock, which pays off when they deliver the performance investors expect.

If the Fairshare Model proves viable with start-ups, established companies may adopt it. To grasp the significance of this, consider the challenges that General Motors confronted as the era of rising fuel prices began. Uncompetitive products eventually led it to bankruptcy. If its capital structure had been based on the Fairshare Model, employees would have had owned Performance Stock that would have changed their response to developments. The quality of communications and the sense of urgency and responsibility throughout GM would have been higher. Product design would have been more competitive. Workers would have been more interested in better processes and training and less inclined to push for higher wages and benefits.

Now imagine that Sears and Roebuck, U.S. Steel, Eastman Kodak and other once iconic companies used the Fairshare Model. It has the potential to enhance competitiveness and ease income inequality by enabling those who rely on a declining return on labor to participate in the higher return on capital.

Over time, initiatives like these, which don’t rely on a lower labor rates, can improve “What’s Happening” by making the American economy more productive and its participants happier.

The Fairshare Model will be published about five months after 250 people pre-order a copy from Inkshares, a publisher that decides what projects to back based on reader support (crowd funding).

You can preview the first chapter and place a pre-order here.

With the USD $5 credit that Inkshares issues to new customers, an e-book will set you back just $10. A combination of an e-book and signed print book, $20. If it isn’t published or you cancel your order before the book is shipped, Inkshares will refund your money. So, for a modest, risk-free amount, you can help launch a discussion about how to re-imagine capitalism.

A special version of chapter 13, Calculating Valuation, with tables to look-up the pre-money valuation based on the size of the offering and the percentage of the company offered.  The tables are not in the full draft at www.fairsharemodel.com

If you are unsure what a company’s pre-money valuation is, why it is important or how to calculate it, this video is for you  https://youtu.be/cc2stjvgEbE The slide deck is here  http://www.slideshare.net/kmsjogren/premoney-valuation-how-to-calculate-it