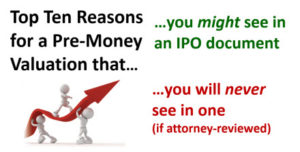 “The U.S. Securities and Exchange Commission can help investors protect themselves from overpriced stock deals if it requires valuation disclosure in offering documents.”

That’s the opening line from an article I wrote called “The Case for a Valuation Disclosure Requirement.” It argues that the SEC should require companies that sell stock in a private or public offering state the pre-money valuation they set for themselves in their offering document.

The article didn’t address a question, “If an issuer is required to disclose the pre-money valuation it gave itself, should it also be required to discuss how it arrived at the figure?” It’s an intriguing one because no one knows how to reliably value a venture-stage company, one whose existence is dependent on new infusions of capital.

I think issuers should be encouraged to discuss the basis for a valuation. But, they should not be required to do so. Why? If management doesn’t want to talk about it, they will say something like this:

“The initial public offering price of our common stock was determined through negotiations between us and our underwriters.”

That banal statement all that was said about the (undisclosed) pre-money valuation for Alibaba Group in its 2014 offering document. It was the largest IPO in history.

If required to explain a valuation, many issuers will say something similar. The world doesn’t need more junk-speak, so I oppose a requirement to explain what determined where a valuation was set.

That said, if issuers must disclose their valuation, some may want to say something about it. That is especially true for a small IPO, such as one based on SEC Rule CF (crowdfunding), which be used to raise $1 million, or Reg. A+, which can be used to raise up to $50 million. Small companies tend to set their pre-money valuation without guidance from intermediaries who assemble investors capable of making a significant investment.

Investment banks provide such feedback but that doesn’t mean that the valuation of a Wall Street IPO is more rational. That’s because it isn’t based on the issuer’s expected operational performance. Rather, it is driven by what the banker thinks secondary market investors will pay. A discount of 15 to 20 percent is applied to that, which enables the best customers of broker-dealers in the banker’s deal syndicate to flip their shares at a quick profit to average investors.

That is how the pre-money valuation is set for large IPOs, but it will not be described that way in a prospectus. After all, that could create cynicism that can undermine the investment bank business model! If any explanation is provided for an underwritten offering, it may look like this.

We [the issuer] estimate the fair value of our common stock using a discounted cash flow model and in consideration of the following factors:

•    the market value of comparable companies;

•    our historical results and forecasted profitability;

•    our market and liquidation value of our assets; and

•    other conditions that affect our business.

Small IPO issuers don’t have a selling machine to stir and probe demand. They make their case directly to investors who are likely to have a more long-term perspective on the stock. Those issuers are likely to discuss their valuation in greater detail. Many will struggle with what to say though. Just as it’s hard for an investor to evaluate a valuation, it is a challenge for a company to explain why it set one where it did.

The first are explanations that you might see if the SEC requires valuation disclosure. The other has those you will not see (if it is reviewed by issuer’s attorney).

Top Ten Explanations for a Pre-Money Valuation You MIGHT See

10. We applied a multiple of 2.3X to our projected revenue for next year.

9. We applied a multiple of 8X to our projected income in three years.

8. We need $10 million and our founders want 55 percent of the company, so that works out to a valuation of $8.2 million.

7. A valuation expert assessed our projections and risk factors, then used a sophisticated model to set a valuation range; we selected the mid-point.

6. We expect to be worth $40 million within 3 years, so we valued the company at $10 million to offer those who invest now an attractive deal.

5. Our management team is worth it.

4. We created a five-year income projection and assumed a constant growth rate thereafter. To this, we applied a cost of capital of 18 percent to arrive at the present value of our company.

3. We met with lots of smart people and came up with a figure that made sense to everyone.

2. Firms in Silicon Valley and New York City are reportedly being valued at $500 million—we’re based in the Midwest, so we offer a discount.

1. Our principal competitor has twenty times more customers than we do, but our product is better, so we should be valued at a premium.

9. Our potential market is $6 billion in size; we expect to own one percent of that.

8. VC backed companies are getting that.

5. We sense an opportunity.

4. Our business model is disruptive.

3. We intend to be the top player in our space.

2. We applied a multiple to our projected loss, then changed the negative sign to a positive.

1. If all goes well, it’s reasonable!

NOTE: While companies are not required to disclose their valuation, they are required to make a highly detailed disclosure about how they value their stock-based compensation (i.e., stock options, restricted stock). The assumptions and calculations must be reviewed by a valuation expert, the issuer’s auditor, and its attorney. Add the internal cost—the software and man-hours—and it is an expensive disclosure. The irony is twofold:

1.      No one cares about stock compensation disclosures. Everyone who relies on the financial statements to evaluate a company adjusts off any stock-based comp charges to get a pro-forma income figure that useful. Stock comp expense is ignored because it is a non-cash expense that has no bearing on the financial health of a company.

2.      Though pre-money valuation is of keen interest to investors and would cost nothing to calculate or disclose, it is not a disclosure requirement.

Karl M. Sjogren is the author of a forthcoming book called  “The Fairshare Model, a performance-based capital structure for companies that raise venture capital via a public offering.”

I call it the Fairshare Model because it balances and aligns the interests of investors and employees…capital and labor.

Readers who enjoy this article may find this of interest: A 2:3 Paradigm for Investor Risk in Venture-Stage Companies