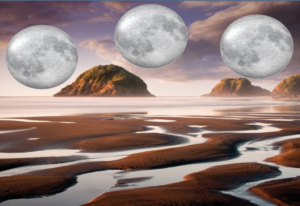 Metaphors can bring focus to complex situations, like what underlies the troubles of the American and European economies. My allegory conjures moons and tides to create an image that is easy to grasp but difficult to solve. It hints at why public dialogue about what to do about it has, increasingly, taken on toxic qualities.

The relationship reflects slow economic growth and rising income inequality. This trend has three interweaving drivers—technology, economic theory and the supply of labor. Their effect came into play in the 1980s and have gathered strength since.

Computers and telecom technologies made it easier to perform all manner of work and be more productive. However, and significantly, it also made it easier to relocate where it is performed. Once digitized, work took far less time and effort to recreate. And it was easily shared, willingly or not.

It is difficult to identify job categories where the income potential has not been adversely affected by ability to move the work elsewhere. Robotics and other forms of machine learning represent a permutation of the trend—they move work away from humans altogether

Philosophers provide the intellectual framework for movements. Technology enabled schools of thought that led businesses to conclude that they didn’t need to do everything in-house. The initial expression of this idea was outsourcing. It first affected support functions like computer operations and payroll, then migrated to those that had been considered central to competitiveness, manufacturing and customer support. Offshoring was just a skip and a hop away.

The outsourcing and offshoring movements were aided by two other economic theories. One was that countries are net beneficiaries of free-trade. The other was that management’s principal duty was to maximize the wealth of shareholders—this exerted a negative effect on the return on labor for non-management employees.

Lean organizational philosophies are a variant of the idea that companies need not do everything themselves. They view activities that do not add value to the final product as superfluous and something to eliminate. They are especially popular among emerging companies, which foretells the future of work, given that these types of businesses are responsible for most job creation.

The Soviet Union dissolved in 1991. With the end of the Cold War, Russia, along with China, sought to transition from a centrally controlled economy to one that was more market oriented while minimizing political instability. Countries indirectly affected by the Cold War, like India, had adjustments to make as well. As these nations became export oriented, the supply of labor increased significantly. As a result, the battle for the commanding heights of the world economies shifted from one based on political ideology to one driven by market economies.

In 1992, the European Union was formed. Member countries came to share a currency; citizens were free to travel, live and work within the E.U. and commerce within it was free of restrictions and border taxes. In part, E.U. countries sought to emulate the United States of America. Additionally, they sought a response to rising imports from Japan and the so-called Asian Tiger countries—Hong Kong, Singapore, South Korea and Taiwan.

Similar trade concerns led to the 1993 NAFTA trade agreement between the U.S., Canada and Mexico. “Globalization” was coined to describe what was going on, increased integration of economies around the world.

Advantages of scale led to city-states, where tribal affiliation weakened in importance. Ancient Athens and Rome were city-states; similar clusters were common in Europe in the Renaissance period. 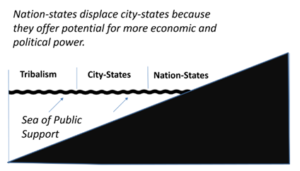 Metaphorically, the tide of support rose to the nation-state level. 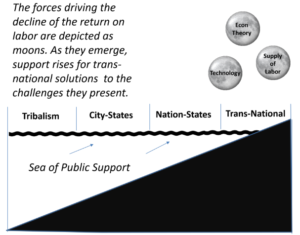 It remained there until the effect of technology, economic theory and an expanding supply of labor began to be apparent to developed economies. These forces, depicted here as rising moons, created a tide of support for trans-national pacts like the E.U. and NAFTA. It spurred other regional trade activity as well, such as the 2006 framework agreement between Mexico and the Common Market of the South (Mercosur) and the Trans-Pacific Partnership Agreement (TPP) negotiated by the Obama administration. 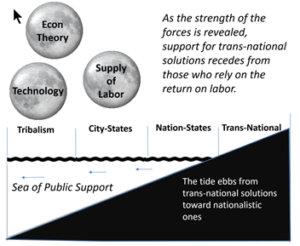 The highwater mark for trans-national solutions is depicted by the effect that the rising moons have on the tide of popular opinion. It was reached in 2016, when the U.K. voted to exit the E.U.—Brexit.

Shortly thereafter, Donald Trump was elected U.S. president. He promised to withdraw from the TPP, to cancel and/or re-negotiate NAFTA and to label China an unfair currency manipulator. He summed up his approach as America First, which mirrored his campaign slogan, Make America Great Again. In France, the leader of the nationalistic National Front party, Marine Le Pen was a finalist in the 2017 presidential contest.

Each of these political outcomes defied traditional thinking. Collectively, they suggest a dynamic—loss of confidence in trans-national solutions because they didn’t protect voters from the forces that pressure the return on labor. The stock and housing markets made it easier to overlook their effect before the Great Recession. The subsequent job losses, tight credit and collapses in asset values made it impossible to ignore. That pain was felt widely and optimism about the future sagged.

Economic growth is measured by the growth in gross domestic product but it comes from increases in population and/or improvements in productivity. Few developed countries see population growth as their economic engine. And it is hard to increase domestic productivity when work can be easily moved elsewhere or, increasingly, to machines.

Conventional policy solutions were not designed to address the reasons for the declining return on labor. Lower income taxes, for example, may encourage economic growth but not necessarily domestic job creation—a business that hires locally and pays well can have customers willing to buy from foreign competitors who don’t. Fewer regulatory requirements benefit foreign and domestic producers alike—and fewer regulations can harm domestic providers of services that help businesses satisfy the requirements. Better training can make a workforce be more competitive, but the specter of lower cost foreign workforce will pressure wage growth and job security.

These challenges help explain why an undertow of tribalism increasingly colors economic talk, especially on social media. Keith Payne, author of The Broken Ladder: How Inequality Affects the Way We Think, Live and Die, put it well when he said

When inequality becomes too large to ignore, everyone starts acting strange. It divides us, makes us believe weird things and erodes our trust in one another.

The tide suggests that protectionist trade policies may gain support, which will fuel debate about how to change the effect of one moon, economic theory—little can be done about technology and the supply of workers. It will be a remarkable debate, since economies are more interconnected than ever. Also, because it will confront the grand premise of the dogma of deregulation, free-trade and shareholder wealth maximization…that economies work best when government gets out of the way of its participants.

A nation with high labor costs need not resort to protectionism. It can compete based on workforce training, infrastructure, legal process, capital markets and an intolerance of corruption. An economy can compete based attitudes of its participants—entrepreneurs and those who decided to back them; advisers, investors, marketers, suppliers, regulators and even those willing to buy new products. In other words, economies compete based on business ecosystems, not just parts. Unfortunately, a holistic approach offers little solace to those who feel most damaged by the declining return on labor.

Perhaps we need philosophers from across the political structure to describe what it means to live a good life in the times we face and what a vital, innovative economy might look like—one that allows for self-actualization by more people. Essentially, we need a framework to re-imagine capitalism.

Karl M. Sjogren is the author of a forthcoming book called “The Fairshare Model, a performance-based capital structure for companies that raise venture capital via a public offering.”

It will be published about five months after 250 people pre-order a copy from Inkshares, a publisher that relies on reader support to decide what to publish.

Preview the first chapter at https://www.inkshares.com/projects/the-fairshare-model 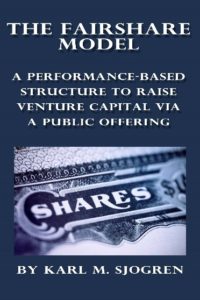